Yes, they are every bit that bad.

The partisanship…..the extremism……lack of respect…….the out right lies…….the misinformation (and yes, it is different from lies)…….and it all comes down to the American voter….YOU voted for morons and now you are paying the price for that vote…..I know, what could be so bad we might get lower taxes and balanced budget and spending controls….what could be so bad? Glad you asked!  While you were bobbing and weaving through t … Read More

This quote comes with the video –

These Tuesday evenings will each begin with an update and analysis of major economic events of the last month and their contexts of longer-term economic trends shaping politics and society here and abroad. We will focus on the evolving global capitalist economic crisis and its consequences. We will examine topics such as the social costs effects of the historic long-term US unemployment, national debt crises and “austerity programs” in Greece, Ireland, Spain, and beyond changes in today’s Chinese economy and their global effects, tax reform and the entire tax issue in the US today, continuing crisis in the US housing and credit markets the economics of immigration.

These are the first four –

This picture is from the American Memory Project at the Library of Congress. This is from a photo collection of the Great Depression.

Now, take a look at a more hopeful poster – 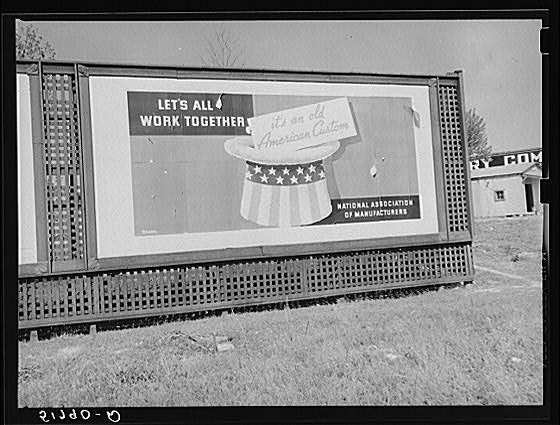 This is from a huge collection of pictures. You might take a look.

It is hard to describe my anger at these “born again” budgeteers. My students suffer. The people I know suffer. This economy is damaging lives and destroying the hopes and dreams of tens of millions of Americans. And now, only now, do these cowardly wretches find the fortitude to challenge spending. It seems you can make wars, cut taxes and do every kind of strange appropriation until the American people are hurting and then and only then, must we become “tough minded” and fiscally concerned.

We exercise fiscal restraint according to Keynes when the economy is healthy. This one isn’t. We labor under intense levels of unemployment, a little under 10%. If we count those who have simply given up looking for work, the number climbs toward 16% which is roughly the same as in the great depression. I tell you with conviction that this recession is becoming and may already be a depression and our leaders are unable and unwilling to meet that challenge.

We are rapidly moving toward desperate times. Each day I drive to work and see businesses closing. Each day I see nothing to give me hope for my students and confidence in the economy. Each day I wait and hope and pray that the leadership of this country will do the simple and basic things necessary to employ the great and good American people. This people who have astonished the world with their achievements and can do so once again if only given the opportunity.

But I know this is not going to happen. This people do not appear to be worth a second glance. When fiscal pain must in the eyes of these unsought comedians, these fact distant fools, be felt, it is only when the great mass of Americans are enduring the pain and suffering of evil economic times brought on by the rapacious stupidity of the financial elite.