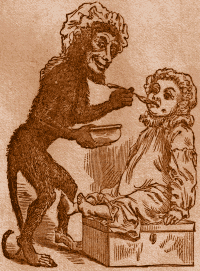 “Stop me before I overpay again,”might be scratched on the wall of Goldman Sachs’, if the firm had any insight or shame. But they don’t. Reuters News Agency reports that Goldman Sachs, J.P. Morgan and Citibank are among the firms who will be cited by the Obama administration pay czar Kenneth Feinberg for having made “ill-advised” payments. (For ill-advised read unearned) The payments in the 17 institutions cited total over one billion dollars. This was in 2008 when the firms were awash with taxpayer money from the bailout.

You see it doesn’t matter what scrutiny they are under, whether or not the public is angry, whether an action is right or wrong as long as the money flows. Money, Money, Money, the arbiter of all decision making on Wall Street, the great green god that supplants the real God and any of sense of responsibility. They know that the only important thing in the world is money. It buys happiness, sex, influence and immunity from the duties that the rest of us take for granted as part of our lives. They live in separate communities with separate education systems and when our children serve in the military, become teachers, policeman or firemen, they snicker at our stupidity.

Or they decide we are unworthy, take a look at this excerpt from Ben Stein’s article in the American Spectator:

The people who have been laid off and cannot find work are generally people with poor work habits and poor personalities. I say “generally” because there are exceptions. But in general, as I survey the ranks of those who are unemployed, I see people who have overbearing and unpleasant personalities and/or who do not know how to do a day’s work.

That’s right, the millions of unemployed their lives in tatters because of casino capitalism, aren’t there because of a savage recession (depression). No, they’re just lazy.

By the way, the article just oozes with Ben Stein’s concern for his poor friends who made bad investments. I can’t help but be curious where he would meet the unemployed. Maybe he’s just confused. Maybe he’s really thinking about his upper crust friends who don’t know how to do an honest day’s work or exercise a workable personality.

I shouldn’t be so angry. Right? Why should the fact that there is one job for every five applicants bother me? Why should an economic elite that moves every job humanly possible to some distant shore where they can ignore those annoying work place laws like child labor, wage and hour, and most annoyingly of all, worker safety, bother me? Why should I be upset? After all, there are a lot of workers, a lot of surplus population that needs culling.

I want justice. I want hard working American to reap the benefits of their hard work, their devotion to this country and their willingness to go the extra mile to do what’s right.