(Satire) A MESSAGE FROM THE AIRLINES TO ALL OF YOU 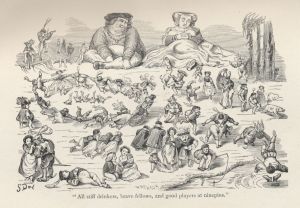 There aren’t many of us.

That gives us monopoly power.

Let us make this clear to you.

We make the rules and you pay us money.

Don’t be crying to your congressmen.

You don’t live in a free market.

If you did, we would compete and there would be leg room.

You don’t live in a democracy.

If you did Congress would stop us from denying you leg room.

and give us the money.

And, in case, you forgot, we are the makers, the creators of value in this country and you are the takers.

I firmly believe that is how our “benefactors,” in this case, the airlines feel about how things work in this country. Yes, I’m shrill and mean. But Americans have to sit in cramped seats for hours because the airlines exert monopoly power and they own our gerrymandered representatives the way farmers used to own cows and chickens.

Millions of Americans ride the airlines and because of how this system is constructed, their voices are of no importance.

And let me remind you, that because of the miraculous powers of the invisible hand and the free market, none of these leg room problems are happening or can happen. The market should have provided leg room for all at good prices because of the wonders of competition.

Neoliberal economics is simply a fantasy for the well to do.

In recent years, airlines looking for cost savings have reduced the sizes of seats and cut the amount of passenger legroom, among other changes.

Passengers have often complained about the increasingly cramped quarters.

Some flights have been disrupted after disputes broke out among passengers because of seating arrangements.

“It costs you an arm and a leg just to have room for your arms and legs,” said Senator Chuck Schumer, who sponsored the amendment, which was attached to a broader aviation bill.

Many airlines now charge passengers if they want more legroom.